I quit my job. It felt like nothing I did was enough for them, they kept expecting more and more, and it got to the point where I was having panic attacks over it every day. No paycheck is worth my mental stability, and it's mighty shaky even without this kind of stress. I'm going to try to find another job right away, something a lot less stressful. I still have a paycheck and a half coming to me, so at least I won't have to scramble for money right away. Wish me luck on finding a new job and not beating myself up over all this!

So I'm pretty much living with Jake now. :D The only real downside is that I have to pay his parents rent eventually, but that shouldn't be too much. Besides, we'll be looking for an apartment soon and will hopefully have one by New Year's.

I'm fully confident that Savers will be keeping me after November 6(my 90 days), so I feel a little better about scouring the internet for apartment listings. Just yesterday both managers told me I've been doing a phenomenal job lately and that they were glad I fought to stay in production. I've been taken out of shoes, which doesn't really bother me now that Thomas is gone(they took him out of shoes for a stupid reason and wouldn't let him go back, so he quit. :( ) because he's the only reason I wanted to work in shoes in the first place; he was just so nice. His roommate works at Savers and said he was doing fine, that he's going to school and gets financial aid, so he doesn't really need a job anyway. I'm just glad he's okay.

But yeah, back to work stuff. I was taken out of shoes so I could be the production floor's "fire extinguisher," as the managers put it. :P I just run around and fix everything that other people screw up, because I'm super fast when it comes to hanging and tagging/ordering clothing, apparently. WHO KNEW I WAS GOOD AT THINGS. :U We've been getting done an hour late every day this week, even with all my help, plus my feet are killing me, so I'm ready to stab things by the end of the day. But just knowing that they really appreciate everything I'm doing makes it so much easier. I always feel like I'm not doing enough and when told me how grateful they were I just about started to cry asdfjkl. ;A;

I really wish we could find more competent employees; Savers has been hiring and firing like crazy lately, and for good reasons. Three rules for keeping a job: Show up, shut up, and do what you're told. They're some hard rules to remember, for some reason. We've had mostly ditchers, complainers, and lollygaggers since I've been hired, but there are some really hard working new hires to make up for it. Hopefully we can find more people who are actually willing to work for their money.

That's enough employee babble. I feel like I haven't had time to do anything but work, eat, and sleep lately; I've only been home once in the past month, so I haven't seen my fuzzbutt cats much either. :( Hopefully Jake and I can find a place that allows them; my parents said they'd take care of them if it came to that, but I really wish they could be with me.

I should probably go to bed, but the dog whining at the foot of the bed is going to make this difficult.

So my interview was on Friday, and I think it went well. They're hiring for full-time(42.5 hours/week) in the sorting/labeling area, so if I'm hired I won't even have to deal with customers! I'm quite happy about that, especially since I thought I would be interviewing for a cashier position. Plus they're hiring more than one person, so it's not me against ten other people for one job; that makes me feel a little more optimistic. :U They're only paying $7.45/hour, which is a little more than Wisconsin's shit minimum wage, but because it's full time I hardly care. I'd be taking home at least $1000 a month, which would be more than enough when combined with Jake's monthly income for us to move into an apartment together! And of course he's on board with that, otherwise I wouldn't be talking about it. Of course, we'll probably save up for a few months beforehand. Can't pay that lovely pet/security deposit with sad kitty stares. As I type this, Mona is knocking things to the floor on purpose. We probably won't get that security deposit back. Filthy beasts. :U

Hire me, Savers; I'd like to start my independent life and be happy, please. ;A;

In other news, I ate like shit the past week. Gonna try harder this week. Life goes on.

Why is it that whenever I come home after being at Jake's for a week I eat way too much and stay up way too late? I almost doubled my calorie intake yesterday and stayed up until 5 am this morning. Needless to say, I feel like shit today. It's not like I'm depressed about being home or anything; I know we both need time to ourselves. It's always weird when you slip up after changing your habits; you realize just how crappy you felt before on a daily basis, bloated and lethargic.
I haven't gone over my calorie limit today so that's one thing I can be proud of, since I tend to get discouraged and quit whenever I screw up something like this. I've lost a couple more pounds, only 15 total since the beginning of the year, but it's better than gaining it. I'll admit that I wasn't trying very hard before, losing a couple pounds and then quitting, rinse and repeat, but I'm really trying not to fuck it up this time. Jake's cheering me on, and it really helps to know that for once someone believes in you and wants to help you reach your goal. ;w; 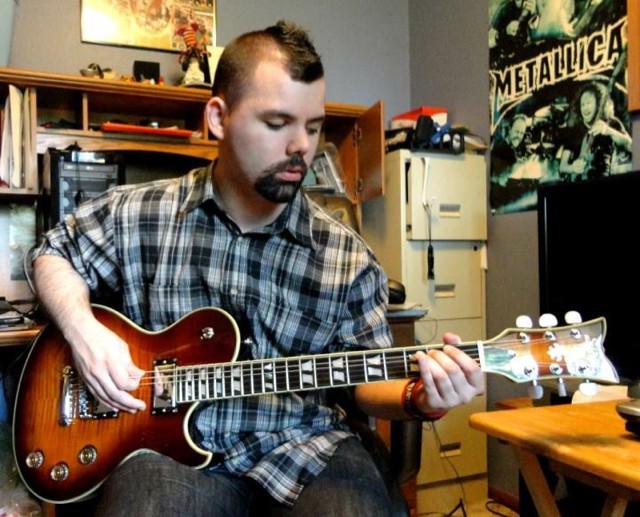 My man got a new guitar on Thursday! He used his credit card, which I was a little peeved about, but he traded another guitar as partial payment so he didn't spend ~as much~ as he would have otherwise. But it looks and sounds gorgeous, he regularly pays his credit card bill, and he's happy with it, so that's all that matters. He also offered to buy me yarn that day, so I should probably just appreciate the fact that he supports my addiction. xD

Oh, and that mohawk? That was all me. Damn, he looks hot. :V

So I actually did something crafty today: 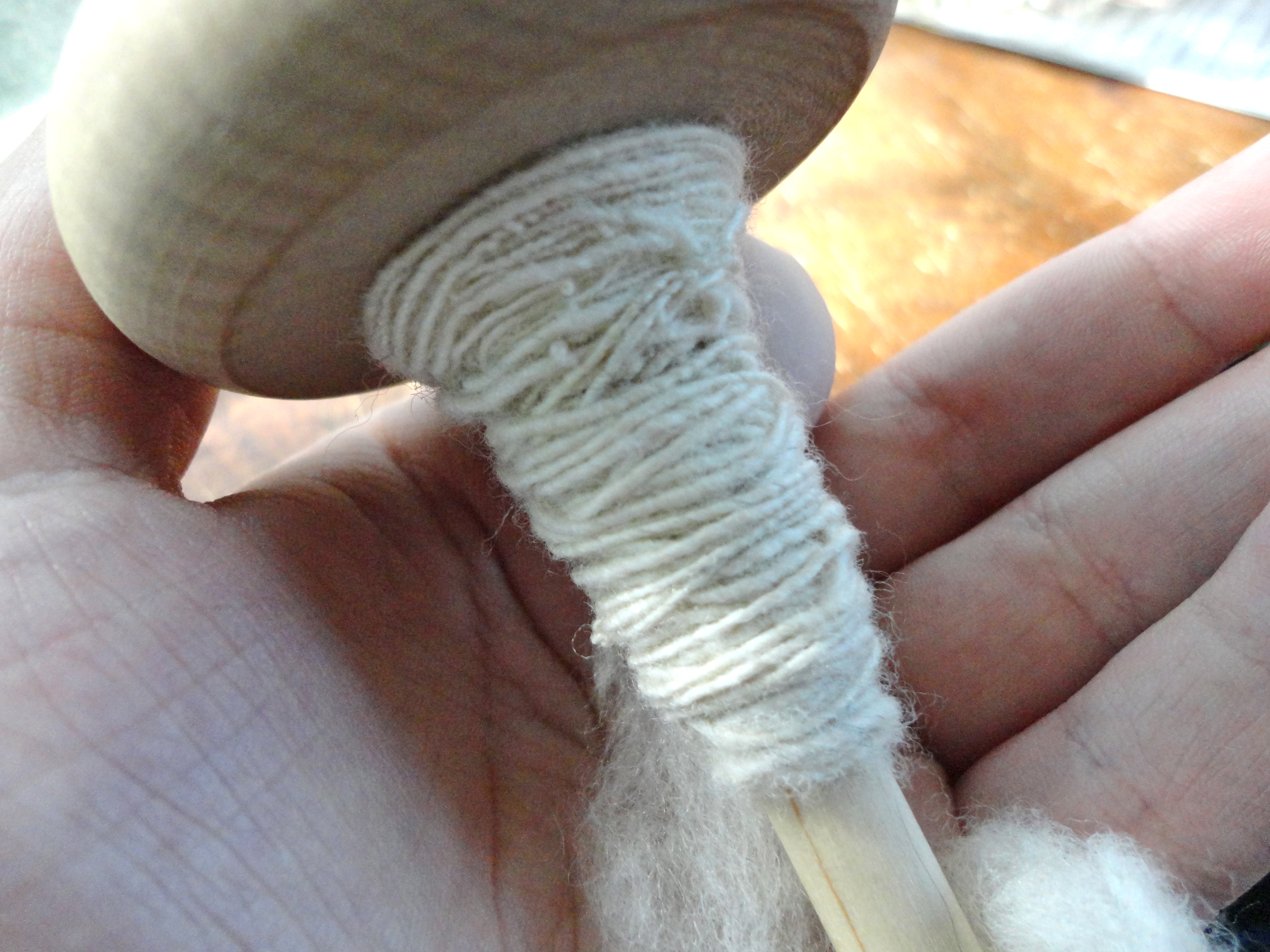 This is my second attempt at spinning.  Would you like to see the first? 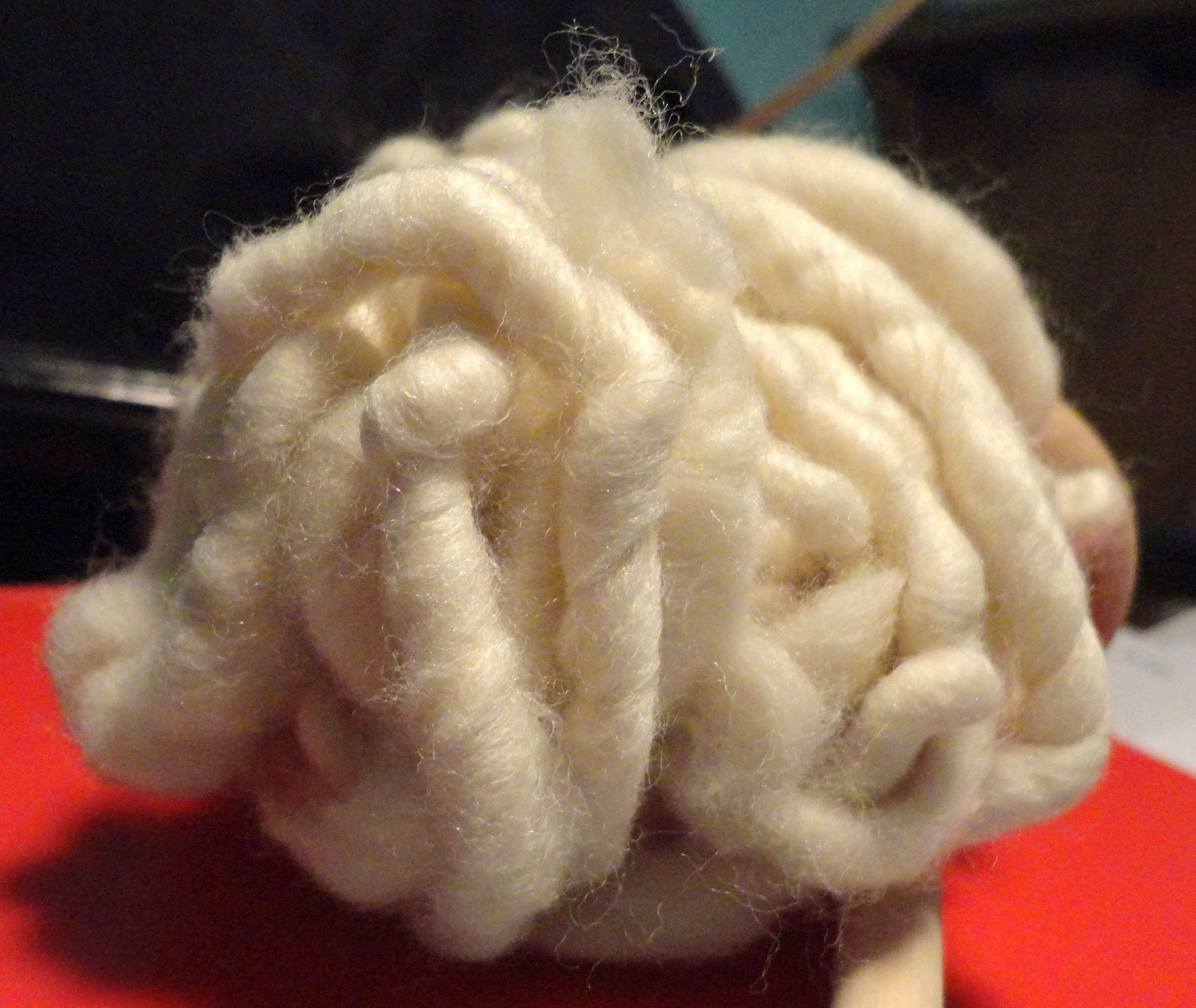 Absolutely terrible, right?  I did this two years ago and I was so discouraged when it turned out like this that I left it on the spindle.  What a thick, clumpy mess; it's been sitting on my shelf looking pathetic all this time.  I'm so proud of myself for picking it back up and being able to do it right without even struggling.  I plan on spinning the rest of my white roving, spinning yellow and then black so it makes a striping effect when knitted, and then plying the two together.  It's going to be gorgeous. ;A;

I've got my crafting mojovation back, Ren!  I'll be finishing your hat tonight!

Chicken soup has CURED ME OF ALL THINGS. I had a can and *POOF* I was better. My throat still hurts a little, but oh well.

Both Jake and I have been sick all week, him from allergies and me from who knows what. It started out as a sore throat, morphed into a sinus infection, and now it's turned into ear and jaw pain so bad I can't listen to or chew anything, plus a shitty cough and my nose running so terribly that I've had to put paper towels under my head to sleep. I've been curled up on his futon all week. It hurts to even lift my head, let alone do anything else. At least we both feel like crap, that way we can't feel bad about one of us boring the other.

On the bright side, I had two interviews(for the same thing) at Walmart on Wednesday, which I believe went well. Now it all comes down to what my references say about me; if it's good I'll have a third interview, which is basically a job offer. ALL THE JOBS WILL BE MINE. U8 It's Walmart, but it can't be THAT terrible, right? I interviewed for the electronics department, so it's not like I'll be cashiering or cleaning bathrooms(for once!). If they call and ask me to come in on Monday I'm screwed, because I'm 95% sure I won't be better by then. And it doesn't pay to go to urgent care to see what a doctor can prescribe me, because I don't have the money to pick up the prescription.

OH, and I was going to donate plasma at Biolife to earn some cash, but the first time I was there I had a fever for no reason. Go me. :l I've been trying to get back in, but I have to schedule it as a physical appointment since I only got halfway through my first and there isn't anything available until the Monday after this coming one. If I get a job I'm not going to worry about it, though. Let's hope I don't have to resort to people stabbing me for cash. 8l

I can hear Jake listening to a song in the other room. It sounds stupid, but that might be because my damn ears are bleeding. :U

I feel like posting but I have no significant news SO HI EVERYBODY POINTLESS POST IS POINTLESS.

OH PANNSIEBUTT I LOVE YOUR VIDEO. It's nice to know we're both amused by the same random things. /watches forever

My next post will contain birthday spoils and other fancy tidbits of useless information. Good day to you. :U

My birthday will be just fine, because I'll be spending it at Jake's. (B